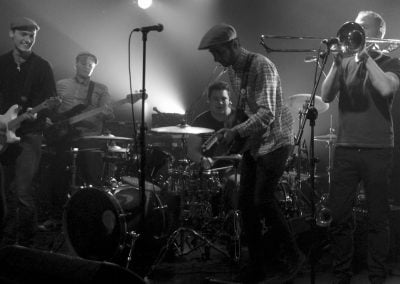 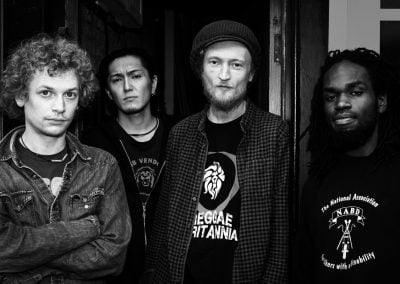 Mr B the Gentleman Rhymer

12pm – 1pm / Hot Wires
Hot Wires follow the path of the Blues,
picking up songs from the 1920’s Delta
through to post-war electric Chicago Blues
and across the ocean to the British Blues
& Rock scene of the 60’s onwards, giving it
their own particular twist. Influences range
from Howlin’ Wolf to The Black Keys, Led
Zeppelin to the North Mississippi Allstars,
Rory Gallagher to Dr Feelgood.

2:40pm – 3:40pm / Offbeat Offensive
Formed in early 2010, Offbeat Offensive has
earned a reputation as one of Portsmouth’s
most popular and versatile Ska-Punk bands.
Catchy ‘sing along’ choruses? Check.
Hard-hitting riffs? Check. A bombastic five
piece horn section?! You better believe it. Best
bring your dancing shoes, because these guys
(and girl) have all the right ingredients to get
you skanking at any gig or festival. Alongside
their own regular headline appearances,
Offbeat Offensive have also been lucky to
support such legendary acts as The Selecter,
The Neville Staples Band and The Blockheads.

4pm – 5pm / Dream Themes
Paul, Rhodri, Dicky and Rob began life as Frank
Sidebottom’s Oh Blimey Big Band for the London
area. Dream Themes is their high-concept
offshoot project, in which they play semi
professional versions of TV theme tunes. Trivia
fact – The men who play in the group Dream
Themes are also members of other bands, such as
Scritti Politti.

5:20pm – 6:45pm / The Stiff Joints
The Stiff Joints are an eleven slice ska feast
playing an infectious brand of two-tone ska
that makes it impossible to sit still. They are the
ultimate feel-good festival act in the known
universe at the moment.

12pm – 1pm / A special guest…
A special guest will be opening up the main
stage on the Sunday. Get yourselves down
early and find a spot in the sunshine to find
out who.

4pm – 5pm / The Salts
Twenty first century folk fires a respectful
broadside at the traditional. The Salts are
a co-operative of seasoned musicians,
creating what is fast becoming one of the
most exciting and energetic folk concepts of
recent times. The Salts have developed their
own unique sound mixing well written original
compositions alongside traditional tunes
we all know and love, their live shows are
guaranteed to get you dancing and singing
along and their debut album ‘She Rises’ has
received rave reviews across the board.

5:20pm – 6:45pm / The Destroyers
A collection of rogues and misfits surfing
a tidal wave of horns, fiddles and guitars!
Rapidly exploding from the ‘Balkan Brass’
genre they emerge as an anarchic orchestra of
blazing passion and breathtaking originality.
So enter the big top and be immersed in
the winding world of the hurdy-gurdy, the
sonorous land of the tuba and the exotic
realm of the duduk. Be ready to be engulfed
by a wall of mesmerizing virtuosity and a
whirlwind of frenzied dancing!

12pm –12:30pm / Ginger Beats
One man, one Guitar. The Ginger Ninja
is back again with smooth grooves and
reggae sounds.

12:50pm –1:50pm / RiotWeekend
RiotWeekend are a Post-Punk band based
in Godalming, Surrey. Formed in November
2017, RW are soon to release their EP
‘Doomsday Optimist’.

2:10pm – 3:10pm / Mike Dennis
Mike is a classically-trained violinist and poet
whose boyhood love of Run DMC, Beastie
Boys and Gangstarr led him to create a unique
kind of string-heavy hip hop music he refers
to as Violinica… You won’t have seen an artist
like this before.

3:30pm – 4:30pm / Blowing Smoke
5 piece Rock & Roll & Soul Covers Band based
in Godalming, Surrey. Passionate about music
and performing and together they will deliver
a set which offers something for everyone.

4:30pm –5:50pm / The Sid James Experience
The Sid James Experience is a powerful 6-piece
band that perform a rip roaring, roller coaster set of
melodic post-punk power-pop classic cover songs
and inspiring originals. Their energetic, enthusiastic
and engaging performances at hundreds of pubs,
clubs and festival gigs across south-east England
sees them regarded as one of the most entertaining
and exciting forces in live music.

6:10pm – 7:10pm / Mule Train
Back again after last years storming, rock and
rolling performance, Mule train will have you
bouncing off the walls… believe!

7:30pm – 8:30pm / Fjokra
Fjokra is a multi-instrumentalist from Dublin.
Drawing influences from an eclectic mix of genres,
he has been creating and performing music for most
of his life since first beginning to teach himself piano
at the age of three. Now based in London, Fjokra
is live with his eponymous band and has gained
a reputation for exhibiting a uniquely bizarre and
electric live show.

12:50pm –1:50pm / Glass Phoenix
Glass Phoenix are based around Chichester,
West Sussex. They are an original rock
band with cutting edge, original tracks and
outstanding covers!!

2:10pm – 3:10pm / Objayda
Objayda’s secret lies in the unlikely songwriting
partnership between Tarn Ockenden & Tim
Howe following their chance meeting at a
recording session. The band have toured extensively over the years
reaching some unusual corners of the globe and
performing to some half a million people along
the way. They have also written, recorded and
released eight studio albums on their own label.

3:30pm – 4:30pm / Smiley and the Underclass
Smiley and The Underclass emerged two years
ago from the melting pot of West London’s
Ladbroke Grove as the sound of 21st Century
multicultural London. Echoing the rebellious call
to arms of The Clash and Dylan, infused with
the bass-heavy vibrations of Jamaican sound
system culture, Smiley sings the revolution blues
with a burning fire largely missing from today’s
music scene.

4:50pm – 5:50pm / STEViE one Bloke
one Mandolin
Stevie Simpson has been playing regularly at
motorcycle rallies and festivals all over the
UK since 2000 receiving some great reviews
and picking up new fans at every gig. STEViE
has released six studio albums, between them
containing seventy-three original recordings.

6:10pm – 7:10pm / The Free Radicals
The Free Radicals are an acoustic-electric
folk band from Godalming, Surrey, UK that
play English, Celtic, European and American
Bluegrass tunes and songs. They formed in the
mid-nineties way back in the last millennium, in
the days when no-one else had thought of the
name and few knew what free radicals were.